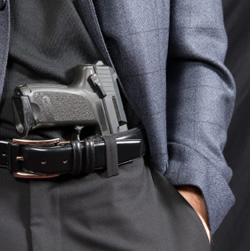 Effective January 1, 2016 new laws for the open carrying of handguns were passed in House bill 910. The new law authorizes individuals to obtain a license to openly carry a handgun in the same places that allow the licensed carrying of a concealed handgun with some exceptions.

Unconcealed handguns must be carried in a shoulder or a holster. People who are already licensed will not have to get an additional license and may continue to open carry. No additional training is required.

House Bill 910 also creates a new Class A misdemeanor offense of trespass by a license holder with an openly carried handgun for a handgun license holder who openly carries a handgun on the property of another without effective consent. The new firearm crime applies if the defendant received notice that entry on the property by a license holder openly carrying  a handgun was forbidden or that remaining on the property while openly carrying a handgun was forbidden and failed to depart.
Although it will not be a criminal offense to open carry in a lot of places some institutions will still not allow handguns on the premises. The law expressly prohibits carrying an exposed handgun, even in a holster, on the premises of a college campus or even a public or private driveway, street, sidewalk or walkway, parking lot, parking garage or other parking area of the college.

If the proper signs are posted, private businesses still have the right allow or bar entry to persons with handguns on their property. Many companies post signs that opening carrying an exposed firearm is not allowed inside the business.

For instance, the president of Whataburger recently stated that the fast food chain will still not allow open carry in their restaurants despite the new law in Texas.

It is worth noting that if a firearm is displayed in a manner calculated to cause alarm then it is considered disorderly conduct. Before these laws were enacted it had been illegal to publicly open carry a handgun. This bill was signed into law in June of 2015 and effective on the 1st of January 2016.

According to a local article nearly 40 Texas zip codes are home to 2,500 concealed handgun licensees. Click 2 Houston investigated concealed handgun licensing classes at a restaurant in Humble, Texas, and found that within only an hour after the course started, course certifications of completion were being passed out to attendees. The training course was supposed to last four hours.  Without the proper instruction, it is doubtful that an attendee would understand the complicated Texas laws for openly carrying a firearm.

License to Carry a Handgun Laws and Selected Statutes in Texas– Find a publication by the Texas Department of Public Safety created as a result of the passage of bills by the 84th Texas Legislature in 2015 and 2016. Read more about GC §411.172 which explains the eligibility requirements for obtaining a license to carry a handgun.

Austin Open Carry FAQ Page– Check out this resource from the city of Austin that list common questions people have regarding new Texas firearm laws. It discusses when a licensee has to present a license to open carry, how many weapons one can carry and various other topics.

It is important to be knowledgeable about all gun laws in Texas so that if you need to protect yourself you will do so in the safest manner. If you do not abide by Texas law regarding handguns, you can face harsh criminal penalties.

Contact The Law Office of Kevin Bennett at (512) 476-4626 if you are facing any criminal firearm charges in Austin, Travis County, or the surrounding areas.

This Article was last updated on November 4, 2016.